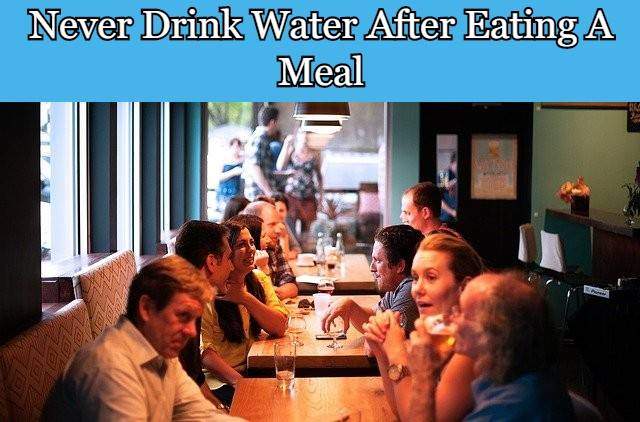 We all have heard from our elders that drinking water right after eating a meal is not healthy but, have you ever stopped for a second and wondered why do they say that? We’ll discuss this in details here:

So there’s science behind this statement and it is not just a mythological fact made up. In fact, it is proven by scientific facts that drinking water after having a meal can cause severe health issues. This is because it can hamper your digestion process, spiking insulin levels.

Some schools of thought have only believed that drinking water right after a meal is healthy. People tend to believe that if they drink water right after a meal the food will get digested easily as they are providing fluid to their body which will help in digestion but The reality stands apart from this.  Right after you have had your meal, the digestive juices in your stomach are active and if you add water to them, it will dilute those juices which will cause bloating in your stomach, and food will remain digested in your stomach. Many nutritionists across the world state that if you dilute those gastric juices in your stomach it will lead to severe indigestion issues and an upsurge in the insulin level that is,  an increase in the blood sugar level which causes many health issues.

World-renowned and various awards winner doctor, Dr. Anju Sood says, “It roughly takes two hours to digest what you eat. The food goes through your esophagus to the stomach, then to your colon before being flushed out of your system. There is a certain fluid-solid proportion in our gastric system. If you consume water before the meals, you are not only disturbing the fluid component by diluting what you eat, you are also fastening the digestion process as the food now enters the large intestine much sooner than it should. Hence it is not advisable to have water just before your meal.”

She has also shown disapproval in having water alongside meals, that is in between the meals as she says that it only hampers the natural digestive process and ruins the natural absorption of nutrients. She has also said in her study on this matter that one should have a 30-minute walk before and after their meal so that the natural digestive system and the metabolism is active rather than drinking water to maintain the digestive processes which are a myth. Drinking water right after your meals can leave undigested food in your stomach. The glucose in that food will turn into undigested fat that will only increase your overall body fat which is not healthy.

Hence, we can say that though water provides many health benefits and it is advised to drink

02 to 08 liters of water every day to maintain a healthy body but the timing of drinking water should be revised and you should not drink water right before your meal or right after your meal to maintain that healthiness of your body.